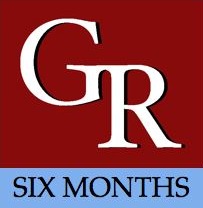 Editor’s note: Six months ago, we set out to look at how women are represented in online news both as sources and as authors. To mark our progress, this week we’re reviewing our findings as well as unveiling new statistics based on what we’ve uncovered thus far in a series of posts. View other six-month coverage here.

“Of the most talked about articles on the web, how many feature women? How many are produced by females?”

monitor each of the top articles in the Project for Excellence in Journalism‘s weekly New Media Index reports based on the links provided. The New Media Index presented an avenue to look for answers to these questions since it culls the top five linked to and discussed stories and opinion pieces from the web during a Monday through Friday week based on commentary from blogs and social media sites. We chose to focus in on the main top five in the blogosphere.

Each month between 12 and 29 articles could be checked, for a total of 118 articles over the six-month period between January and June 2011. Even though there were on average five subjects each week, at times more than one link was offered on the subject. In those cases, we chose to monitor the first mentioned or that which appeared based on the writing as more dominant, unless it was specifically mentioned that two articles shared the attention, in which case we checked both. For some weeks or subjects, no links were provided, resulting in lower numbers during those months’ totals.

The top news source of the links PEJ provided during this time frame was the LA Times, with more than 60 of the 118 articles we monitored, followed by the Washington Post and then the BBC. All other news sources had two or fewer articles in the sample. From each article, we recorded the subject matter, the gender breakdown of the sources and the gender of the authors or producers, similar to what we’ve done with our weekly “gender checks.”

Here’s what was found: 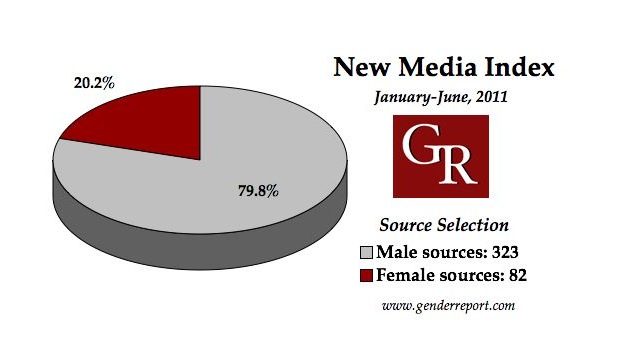 Women made up 20.2 percent of sources whose gender could be identified during the first six months of the year. This calculated out to 323 male sources and 82 female sources.

The low point for female sources came in May, in which they were only 13.3 percent of sources. The high was in February with 28 percent.

Startling was the fact that 49 of the 118 articles contained no female sources at all (but did have male sources) — or 41.5 percent. Only three articles were the reverse with no male sources. Ten articles had no sources and these were mostly op-eds.

We also took a look at the number of articles with a single male vs. a single female news subject as the focus. Eighteen articles featured a single male subject, versus eight that were about a single female subject. Four of the articles were interviews. All of the interview subjects were male (an interview with Microsoft chief executive officer Steve Ballmer popped up twice but is counted once). Of the eight about women, three were about Sarah Palin, the former Alaska governor and Republican political figure, and two featured GOP presidential candidate Michele Bachmann. 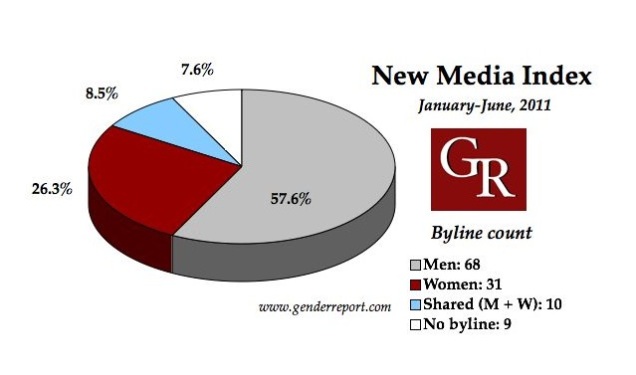 A woman (or two) bylined 31.3 percent of articles by authors of one gender or the other and 26.3 percent overall. A total of 68 articles were by one or more man, 31 by one or more woman, 10 with a shared byline between a man (or several) and a woman, and nine were not bylined.

The low for female authorship occurred in May, when women made up a minuscule 11.1 percent of authors of one gender or the other. The high was again in February with women as 41.7 percent.

Nineteen articles linked to were op-ed or commentary pieces during the past six months. Only three of those were by women. One of the 19 was a staff editorial.

We also decided to take a closer look at whether the gender of the author affected the percentage of female sources.

This issue is something we will continue to look at with our studies in the future.

We’ll be continuing to monitor the New Media Index for the next six months, so be sure to check back for our monthly counts. To review our past posts on our New Media Index studies, see the links below:

As a note to our readers, we hope you remember that our study is still young and has some limitations. Further research is still needed. For other data on gender representations in online news and to compare these findings to others’, check out our “Findings and Statistics” category and our “Useful Resources” page.