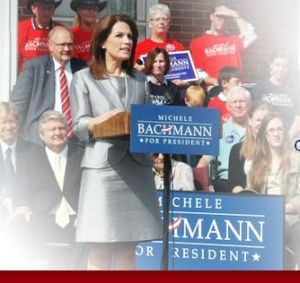 As the primaries for the 2012 Republican nomination come into full swing, one candidate stands out in the race not necessarily for her positions or her politics, but for her gender.

Minnesota Rep. Michele Bachmann officially announced her candidacy last week, and subsequently dominated the week’s news cycle, a considerable amount of which focused on her specific role as the only female candidate in the GOP race, and if nominated, the first female nominee for president from a major political party.

Many news sites focused on finding a label for Bachmann’s approach to politics, repeatedly asking her if she considers herself a feminist. Bachmann “demurred” from the question from the Washington Post, saying  “I consider myself a woman, an accomplished woman,” she said. She noted that many men are energized by her candidacy, and added that there is a fascination with a female presidential hopeful because of its novelty.”

But some think Bachmann could hold a unique demographic by embracing the dicey “f” word of politics. The LA Times said the word could “be the most polarizing label on the sociopolitical stage.” However, A CNN article speculated she would “cringe” away from the title, but went on to comment that her self-defined brand of “evangelical feminism” could be exemplified in her candidacy, which she has referred to as her calling from God.

Also of interest to the media’s exploration of Bachmann’s candidacy was the role of her husband, specifically in their “fundamentalist patriarchal model of marriage” as described by a Slate columnist. Though POLITICO described Marcus Bachmann as “enthusiastically embracing” his wife’s run, the article went on to say he could be more of a political liability than other spouses of candidates. The Gender Report has previously covered the role of spouses in political campaigns, and found similar pressures and vetting in other candidacies.

And Bachmann is not the only one responsible for raising the visibility and participation of women in Republican politics. POLITICO reported on a group of freshmen GOP congresswomen who don’t “neatly fit the traditional model of women” who typically run for office and are working to combat views that the Democratic party better represents the female constituency. But even in this group, only one, Rep. Renee Ellmers, of the nine women featured identified herself as a feminist. Washington Rep. Jaime Herrera Beutler, the youngest of the freshmen women, said she “doesn’t easily accept” the feminist label; she called herself instead pro-woman, just like I’m pro-family, just like I’m pro-man.” Currently Democratic female representatives hold 64 seats in the House, compared to the 29 Republican seats.

On the other side of the aisle, Sen. Kristen E. Gillibrand, who filled Secretary of State Hilary Clinton’s vacated seat in 2009, is also working to elevate women’s role in political activism. Her organization, Off the Sidelines, recruits and raises money for female candidates. The New York Times said Gillibrand “epitomizes the ways in which women are asserting themselves in politics these days. “

No doubt as this primary season unfolds, Bachmann’s gender and role, or denial thereof, as a candidate advancing the position of women will extend beyond just this initial coverage, and we hope her candidacy will continue to push women from all ideologies to involve themselves in American political discourse.

For more statistics and studies on women in politics, check out the Center for American Women in Politics to find statistics and information from Rutgers University.