*Gender Checks are quick examinations of gender representation in individual news articles for the purpose of discovering trends over time. Click here to read more.

On Stltoday.com, one of the lead articles featured on the home page as of 11:10 a.m. (PDT) Thursday, July 21, was titled “5-year-old fatally shot by brother, 10, in Belleville.” Its subject was the death of a 5-year-old boy by gunshots, the third fatal shooting involving a child recently in the area (all accidental).

Here is its gender breakdown: 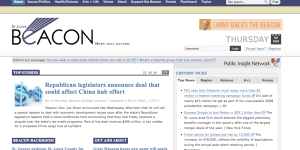 On the St. Louis Beacon, one of the lead articles featured on the home page as of 1:10 a.m. (PDT) Thursday, July 21, was titled “Republican legislators announce deal that could affect China hub effort.” Its subject was a deal reached on economic development that also affects the state’s tax credit programs.

Here is its gender breakdown:

Notes/analysis: The article contains two mug shots, both of males. It also has an image from a press conference where the majority visible are male. As we’ve pointed out before, the majority of those in leadership in the Missouri Legislature are male. At last count, the state’s House of Representatives had 23 women and 34 men. Eight of the 34 members of the state’s Senate were female.