Friday, Aug. 26, marked the 91st anniversary of the 19th Amendment, which granted women the right to vote. To mark what is referred to as Women’s Equality Day, a number of news outlets, blogs and women’s groups as well as President Barack Obama shared thoughts, statements and stories about the anniversary. 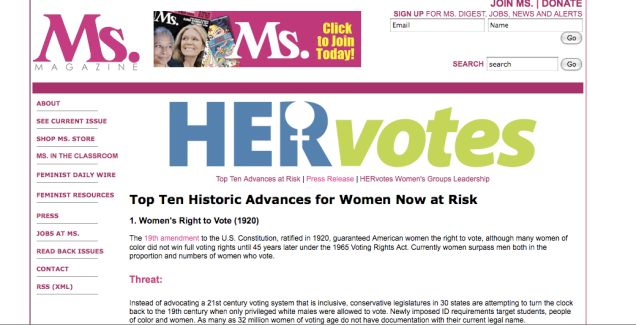 Additionally, a number of women’s groups have gotten together to launch HERvotes, a campaign to mobilize women voters in 2012 specifically around the issues of health care and economic rights (Check out the website: www.hervotes.org).

In line with that effort, Ms. Magazine compiled a list of 10 laws that advanced women that are now being “threatened” or are at risk. That list includes women’s right to vote, which some argue is being challenged by new ID requirements that 34 states considered this year that aim at students, people of color and women, particularly since perhaps as many as 32 million women do not have the required documentation in their current legal name.

Here’s a selection of Women’s Equality Day coverage and commentary:

This is the Gender Report’s Week in Review, a weekly post that highlights some of the major stories related to gender issues this week. Some of these stories may have already appeared in our News Feed or in the week’s Gender Checks. We’ll at times include a longer analysis of stories as well as bring attention to stories that may have slipped through the cracks of the week’s news cycle.