Editor’s note: In January 2011, we set out to examine the ways in which women are represented in online news both as sources and as authors. To mark our first year here at The Gender Report, we’re revealing our findings from our year-long studies as well as other statistics and commentaries in a series of posts. View other coverage of our one-year anniversary here.

A year ago, we asked: What percentage of the most talked about articles on the web feature or are written by women? What we found as we sought to answer this question was not encouraging.

But before we share those results, here’s how we approached answering that question. For a full year, from January through December 2011, we monitored each of the web’s top articles based on the links provided by the Project for Excellence in Journalism‘s weekly New Media Index reports. The New Media Index reports the top five linked to and discussed stories and opinion pieces from the web during a Monday through Friday week based on commentary from blogs and social media sites. For the purposes of our study, we chose to focus in on the main top five in the blogosphere.

During each month of this year span, between 11 and 33 articles could be checked, resulting in a total of 250 articles examined for the completed study.

Though each week generally averaged five subjects, there were occasions when more than one link was offered on the subject. When that was the case, we chose to monitor the first mentioned or that which appeared based on the writing as more dominant, unless it was mentioned or implied that two articles shared the attention, in which case we checked both. For some weeks or subjects, no links were provided, resulting in lower numbers during those months’ totals. For each article, we recorded the subject matter, the gender breakdown of the sources and the gender of the authors or producers, similar to what we’ve done with our weekly “gender checks.”

It is important to note that PEJ made some changes to its methodology for the New Media Index in August, including the use of more sites to track the top stories as well as a larger sample size and range of sources (Read more about those change and the process here.) As a result, we did see some major differences in the sources of the articles and our findings in the months after that change, which is why we’ve provided our results overall as well as broken out for those articles before the August changes and those after. This did skew the overall results, so we caution readers to keep these limitations in mind.

Without further ado, here are our overall findings for this study: 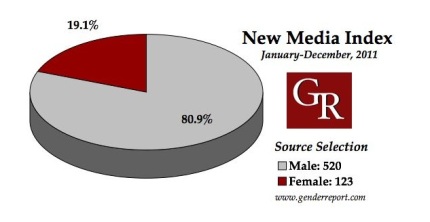 In this study, women were 19.1 percent of sources whose gender could be identified. Approximately 520 sources were male and 123 were female.

What has gone up is the percentage of articles with no sources at all. Only 8.5 percent of articles at the six-month mark had no sources. By 12 months, 30.4 percent, or 76 of 250 articles, had none. This difference was largely a result of the change in the New Media Index’s methodology, which resulted in more blog posts rather than news articles in the top five, many of which did not name human sources.

The year low for female authorship occurred in September, when women made up a dismal 9.5 percent of authors of one gender or the other and 8.3 percent overall. February again had the high with women as 41.7 percent.

Twenty-six articles linked to were op-ed or commentary pieces over the course of the year. Just three of those were by women. One was a staff editorial. In addition, of the blog posts, nearly all showing up after the change in methodology, five of 61 were by women and only one of eight posts by a business was by a woman.

During the year, 13 articles were written by more than one person of the same gender. Three were shared bylines with females and 10 shared bylines among males.

Before changes: January to July 2011

Prior to the change in the methodology for the New Media Index, the majority of links provided were to news articles from major news websites, with the majority of articles from the LA Times, Washington Post and BBC. In these seven months, we reviewed 137 articles, averaging 19.6 articles per month. These were the findings overall from these articles:

After changes: August to December 2011

In contrast, following the changes in the New Media Index, no particular website had more than five out of the total 113 articles or posts. Those that had five were three tech sites 9 to 5 Mac, Engadget and Ubergizmo, as well as posts from Google on its official company blog. The majority of the top stories during these five months were not from mainstream news sites, but instead blogs and specialty or alternative sites. During this time, there were an average of 22.6 articles per month. The following are the overall findings from these articles and posts:

Review our posts from the year on our New Media Index study through the links below:

For other data on gender representations in online news and to compare these findings to others’, check out our “Findings and Statistics” category and our “Useful Resources” page.

Up next: Check back Wednesday for results from our year-long Gender Check study.