Editor’s note: In January 2011, we set out to examine the ways in which women are represented in online news both as sources and as authors. To mark our first year here at The Gender Report, we’re revealing our findings from our year-long studies as well as other statistics and commentaries in a series of posts. View other coverage of our one-year anniversary here.

Women were 26 percent of human sources referenced in lead articles monitored in a year-long study of eight online news sites.

The Gender Report’s Gender Check monitoring project began in January 2011 and concluded earlier this month. For this project, we monitored the articles weekly from two websites — one associated with a newspaper and one considered online-only — in each of the four different geographic regions as defined by the U.S. Census. These websites included the Seattle Times, Seattle P-I, New York Times, ProPublica, Stltoday.com, St. Louis Beacon, Miami Herald and Patch (Seminole Heights).

The study time frame resulted in a total of 53 weeks, but due to a missing week, resulted in a total of 52 weeks of monitoring for at least two of our geographic regions. Between Jan. 18, 2011 and Jan. 19, 2012, we examined a total of 354 articles, averaging about 29.5 articles per month. In total, this broke down to 104 articles each from the West and Midwest regions, 78 articles from the Northeast and 68 articles from the South. These lower counts in the Northeast and South are the result of missed weeks. Though this may have have some slight affect on the overall findings, the standings of these regions among the others have remained consistent over time. 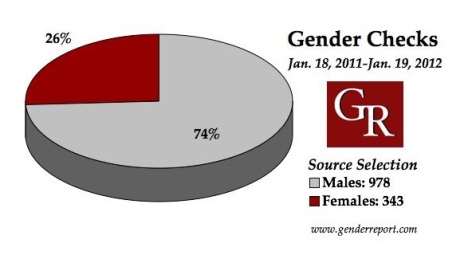 Of a total of 1,321 human sources in the articles we monitored, 978 were male and 343 were female. These totals do not include those whose gender could not be identified.

The year high came with women as 34.4 percent of sources in the 11th month with our low at 19.5 percent in the fifth month.

Among geographic regions, the sites we monitored from the South had the highest percentage of women as sources at 33.1 percent. The sites from the Northeast had the lowest at 19.4 percent. These regions have maintained the high and low percentages respectively during each quarter of our study.

Here’s how sources broke down geographically:

During our study, Patch (Seminole Heights) had the highest percentage of female sources at 43.4 percent in the lead articles monitored on its website. It’s noteworthy that, as previously mentioned, this site also had the lowest number of sources overall as well.

The lowest percentage of female sources came from lead news articles from the The New York Times at only 13.8 percent, followed by Stltoday.com at 22.7 percent. These two sites have continued to hold the lowest percentages throughout the year, though more research would be needed to see if these percentages accurately reflect the content of these sites. We encourage readers to keep in mind that when broken down by each individual news site, our sample size is still small.

As part of this study, we examined how the author’s gender may have impacted  the use of female sources. As we have throughout the year, we saw a difference, with women having a slightly higher percentage of female sources than men.

These findings were based on the results of our year-long Gender Check project to monitor U.S. news websites. For the monitoring, we selected the lead article from each site at the time we visited and performed a “Gender Check” by recording information on the gender of the author and the breakdown of the genders of the human sources referenced in the articles among other details. (For more on what Gender Checks are, read our introductory post here.)

As a note to our readers, this study does have some limitations. This data simply reflects our findings from eight news websites and results should not be assumed to represent all sites in the regions or the industry as a whole. Further research is needed to confirm or elaborate on these findings, which is something we’ll be looking to do in year two.

For other data on gender representations in online news and to compare these findings to others’, check out our “Findings and Statistics” category and our “Useful Resources” page.

Coming later today: Our findings on authorship of articles in this Gender Check monitoring project. Check back for more.