As we well know, and as the recent Status of Women in the U.S. Media report from the Women’s Media Center illustrates, women have long been underrepresented and misrepresented in traditional media and entertainment. 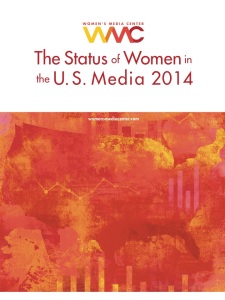 Yet, little is still known about how that translates digitally. Ann Friedman points this out in a column for the Columbia Journalism Review, stating: “While the lack of diversity in cable news, newspaper A-sections, and on talk radio is appalling, it’s not shocking. What is surprising is that so few organizations are tracking the progress of women and other marginalized groups in digital media.” While the WMC report did address women’s use of social media and their presence in the tech industry among other topics related to the Internet, Friedman is right in noting the minimal attention to women’s presence in digital media by groups who study and monitor these issues overall.

This was in fact the reason we started The Gender Report in January 2011. At the time, even less was known and very few had looked at these issues. WACC’s Global Media Monitoring Project included online news sites as a pilot in its 2010 report, finding that 36 percent of the news stories in the online samples reported by women. Since then, there have continued to be few examinations. The OpEd Project’s 2012 byline study included two online-only sites — the Huffington Post and Salon. In this study, women wrote 33 percent of the new media op-ed articles (compared to 20 percent in legacy media). Our own byline report in 2012 looked at the gender breakdown of bylines at six online news sites (Center for Public Integrity, Politico, Slate, ProPublica, California Watch and the Texas Tribune) over a 6-month period and found that the percentage of bylines for males exceeded that of females at four out of the six sites (Disclaimer: This study was included in WMC’s 2013 report). A different study in June 2011 found that women made up approximately 28 percent of those identified as principal staff members at online news outlets included in the Columbia Journalism Review’s database (then “The News Frontier Database” and now “Online News Startups”). (You can find examples of our other studies here). These studies, among others, start to suggest that women and other marginalized groups may not be much better represented in certain online media spaces than they are in traditional media (see Janine Jackson’s piece to that effect from FAIR in 2012 as it relates to both sex/gender and race).

However, these infrequent and sporadic studies, among others, do not do justice to the complexities of these issues regarding whose voices are represented and heard online. As Friedman notes, “few people are paying attention to the digital byline breakdown.” Many challenges exist to traditional “byline counting” and to examining these issues online, which have limited both our work and that of others. Some of these include:

As these questions suggest, the actual doing of this work is fraught with a variety of challenges and limitations that have to be addressed. We welcome your thoughts on ways to engage in work that looks at the representations of women and other marginalized groups online. While this post highlights some of the work that has already been done to monitor the representations of women in digital media, we know there are others as well. Please feel free to share examples of other work monitoring these issues.

If you are interested in reading more about the Women’s Media Center’ latest report, here are a few links worth checking out: